The relations between the two countries have remained warm, cordial and excellent, marked by equality, mutual trust, deeper understanding, strong bonds of friendship and solidarity and growing interaction. As an active member of the United Nations system, Nepal persistently and vigorously opposed the policy of racial segregation followed by the then government of South Africa and thus played an active role in the United Nations and other international fora in support of abolition of apartheid system in South Africa. Shortly after taking the membership of the UNO in 1955, Nepal served as a Member of the United Nations Special Committee against Apartheid since its inception in 1962 and as a Vice Chair of the Committee for 25 years starting in 1969 until the Committee was disbanded in 1994. As a Member and later Vice Chair of the Committee, Nepal kept herself actively engaged in the fight against Apartheid in South Africa. South African Government, the political leadership as well as the people commend the role Nepal played in the UN in support of democratic governance in South Africa.

Both Nepal and South Africa are active members of Non Alignment Movement (NAM). At the United Nations and other international fora, Nepal and South Africa share common values and hold similar views on issues relating to the promotion of peace, democracy, human rights and right to development of developing countries. The bilateral relations have been consolidated further through the exchange of bilateral visits. Various visits from Nepal have also been focused on learning from the successful and exemplary model South African model of Truth and Reconciliation process adopted in the post-Apartheid South Africa. Nepal’s new Constitution written through the process of Constituent Assembly and promulgated on 20th September 2015 has provided for some provisions which are similar to that of South African Constitution and Bill of Rights, which have remained inspirational sources for various study-visits to South Africa undertaken by the Nepali political and official delegations during the writing phase as well as in the aftermath of the promulgation of the Constitution of Nepal with a view to learning from South African successful practices.

As Colombo is both physically as well as connectivity point of view is in farther distance than New Delhi, Nepal has been requesting the Government of South Africa to review the current accreditation and consider giving continuation to the previous arrangement until opening up South African residential Embassy in Kathmandu.

Nepal – South African bilateral relations have been further consolidated by various visits. Since the establishment of diplomatic relations, a number of high level delegations from Nepal have visited South Africa. The then Prime Minister of Nepal Rt. Hon. Mr. Girija Prasad Koirala visited South Africa in September 1998 to participate in the XII Summit of the Non-Alignment Movement held in Durban. Then Speaker of the House of the Representatives Rt. Hon. Mr. Taranath Ranabhat participated in the Inter-Parliamentary Meeting of the World Summit on Sustainable Development held in Johannesburg from August 29 to 30, 2002. The then Honourable Minister for Foreign Affairs as well as Minister of Home Affairs Mr. Madhav Prasad Ghimire, paid an official visit of South Africa on December 08, 2013 leading a Nepalese delegation to participate in the Memorial Assembly organized by the Government of South Africa and express solidarity of the people and Government of Nepal to the people and the Government of South Africa at passing away of the Nobel laureate H.E. Mr. Nelson Rolihalahla Mandela, former President of the Republic of South Africa.

Similarly from South Africa, Her Excellency Ms. Nomaindiya C. Mfeketo, Deputy Minister of International Relations and Cooperation (DIRCO) of South Africa, leading an eight-membered high-level delegation paid a working visit to Nepal from 20 to 22 August 2015. This was and is the first-ever high-level visit from South Africa to Nepal since the establishment of diplomatic relations. The visit was mainly aimed at underlining the importance which South Africa attaches to its bilateral relations with Nepal and to demonstrate South Africa’s resolve to strengthen and broaden political, economic and commercial interaction with Nepal. Prior to this, the first-ever official-level visit to Nepal from South Africa was led by H.E. Dr. Anil Sooklal, Deputy Director-General at the Department of International Relations and Cooperation (DRICO) of South Africa in June 2012. Both countries are now working towards exchanging more visits at higher political levels.

Humanitarian cooperation from South Africa to Nepal at the earthquake in Nepal, 2015

The devastating earthquake in Nepal on 25 April 2015 brought about untold misery with the irreparable loss of human lives totaling around 9000 people and damage to properties. In the aftermath of the difficult hour of earthquake, Nepal received generous humanitarian support as and solidarity from the Government as well as the people of the Republic of South Africa. The Government of Nepal, the people including the victims of earthquake, are grateful to the Government and the people of South Africa, the civil society, charity and business entities and various organizations including the Gift of the Givers Foundation for their prompt and warm response with humanitarian support including rescue and medical support and monetary donation extended towards the earthquake victims of Nepal at the hours of need.

The bilateral trade and economic interaction between Nepal and South Africa is growing from strength to strength every year as evidenced by the incremental trade volumes as well as growing interest of business community to expand and diversify the existing pattern of trade and cooperation for the mutual benefits of both countries. Even though the progress trend is incremental, not a dramatic one, there are many other opportunities that exist between these two countries to fully explore from both sides. One of such areas could be mining expertise of South Africa which can be harnessed for developing potential enormous mineral resources available in Nepal. There is enough scope for further cultivating relations in the fields of trade, tourism, investment and education among others.

According to the statistics of the Department of Industry of Nepal (DOI), as of 2014/15 (2070/71 B.S), the Department of Industry has granted approval for the establishment and operation of 2 industries and 7 projects in Nepal by the South African nationals with a total investment commitment of about NRS. 87.3 million (USD 0.85 million) with the creation or possibility of creation of 253 jobs in Nepal. (Source: http://www.doind.gov.np/index.php/publications/industry-statistics)

South Africa, with a population of around 56 million (according to Statistics South Africa (Stats SA) 2016), can be a big potential source for Nepal’s tourism. It could generate more outbound tourists in the coming years due to increment in middle income class people and their growing interest as well as capacity to travel abroad. According to South African Tourism statistics, 2015, about 5.4 million South Africans travelled abroad that year, while about 9 million foreign travelers visited South Africa mostly for tourism purpose. South African tourists, traditionally, used to prefer visiting neighboring African countries and Europe. However, this trend is changing as many adventure tourists are looking avenues in Asia.

Nepal can naturally be a preferred choice in adventure tourism for South African tourists, especially the trekking-loving tourists and college students who mostly choose to go upto the Mt. Everest Base Camp, Annapurna, Langtang and other trekking routes in Nepal. The Embassy is also working in promoting Nepal in South Africa and creating awareness that Nepal is safe destination for tourism. After about a year of recession in tourism in Nepal due to the devastating earthquake in Nepal on 25 April 2015 in which year only about 800 South Africa tourists visited Nepal (mostly in the first 4 months of the year), the number of South African tourists visiting Nepal has increased from about 1300 tourists in 2013, to about 1800 in 2016.

According to South African statistics, 2013, the number of visitors from Nepal to South Africa stood at 626 that year and in 2015 the number slightly decreased to 565, which may be attributed due to the earthquake in Nepal. Although the contact and interaction at the people to people level is yet to flourish, around 500 Nepali citizens are residing in South Africa including around 25 Nepali families of permanent residents who are mostly engaged in highly-skilled and professional medical doctors and a few of them doing business. Among the remaining ones are students studying academic course in business management, hospitality management as well as pilot training course in South Africa. A very small number of Nepali citizens are engaged in or are employed in business sectors.

There are discussions going on regarding the promotion of exchange of educational tours between Nepal and South Africa at school and college level. Some institutions of South Africa send their students to Nepal under familiarization trip, challenge trip and community serving programme with a view to give their students exposure to different environment and community abroad and boost their knowledge of other culture.

The trade between Nepal and South Africa is though small in volume, is increasing moderately. According to the statistics published by Trade and Export Promotion Center of Nepal (TEPC), Nepal exported goods worth NRS. 31,867,000 to South Africa and imported to the tune of NRS. 267,486,000 in 2007/08. Aircraft engines and parts, machinery, copper scrap, wine, juice, cloves were among the items imported from South Africa in those years. In 2014/15 while Nepal exported goods worth of around half a million USD and imported goods to the tune of over USD 33 million from South Africa, with a trade deficit of 33 million USD to Nepal. In recent years, the figure and trend of import and export vis-à-vis South Africa has been much diversified. The following table shows the balance of trade which is in favour of South Africa:

Following bilateral agreements/MOU are in the phase of negotiation between the two countries:

Nepal and South Africa need to work towards entering into a Double Tax Avoidance Agreement to encourage the business community and investors of both countries to do business in one another country. 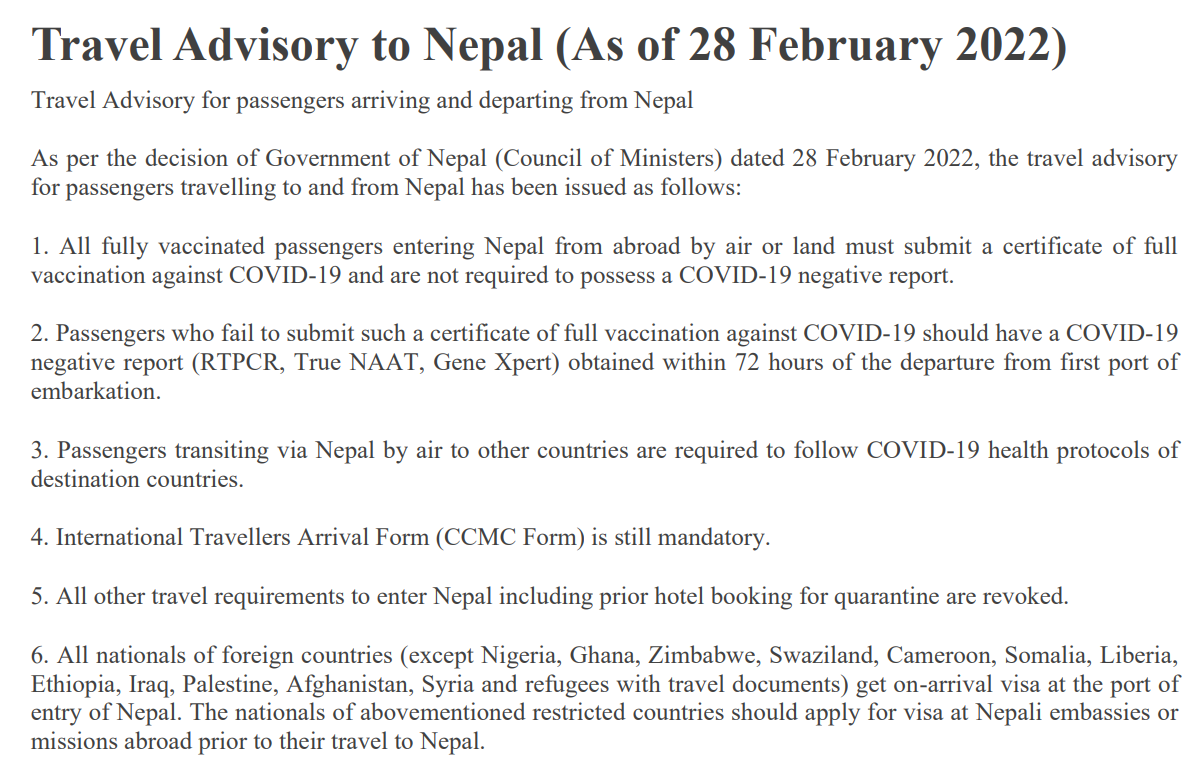